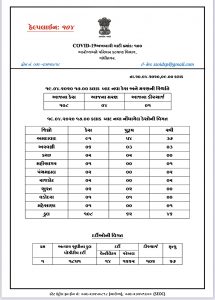 Javed Sheikh, one of the Ishrat Jahan fake encounter victims, was “entrapped and lured” to visit Ahmedabad, CBI has alleged on the basis of call records showing a PCO was used to make repeated calls to the then IB Joint Director Rajinder Kumar and Sheikh within half-an hour. The supplementary charge sheet submitted by the […]

Vadodara: VMC to construct plant to cater to water demand

Vadodara Municipal Corporation (VMC) will built a water supply plant worth Rs 150 crore on the outskirts of the city for supplying water from Mahi river to Vadodara, its Commissioner Vinod Rao said. The project, located at Sindhrot village nearly 40 km from here, will have a water supply capacity of 300 MLD (million litre […]

Security beefed up due to Padmavaat row in Gujarat

Security beefed up due to Padmavaat row in Gujarat In Gujarat: Security increased outside cinema halls in Ahmedabad due to Padmavaat The  movie will not release in Rajasthan, Gujarat and MP on Thursday as film distributors in the 3 states have decided not to pick movie  reels. Karni Sena has given a bandh call, 2 […]