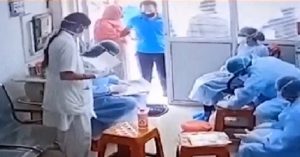 Today in Ahmedabad, in Bapunagar area one poster with slogan of “Show respect to cows as it is the leader of all bovines” has created sensation and controversy among various groups and getting political angle. The poster had photos of Gujarat Chief Minister Anandieben Patel and education minister Bhupendrasinh Chudasama, which conveyed that milk, ghee […]

Today one more accused Bharat Darji allegedly involved in Naliya gang rape was arrested. In Naliya of Kutch, with the help of an NGO gang rape case has been exposed. Victim filed complaint with the help of PIAC and CPC. Henri Chacko of NGO informed that it was a well planed sex racket in which […]