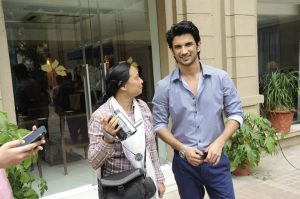 The benchmark BSE Sensex pared its early gains to drift lower by 135.33 points in late morning deals on selling in key blue-chips stocks IT, Teck, telecom, banks and oil&gas. Participants traded caution ahead of key macro numbers of Industrial Production (IIP) for December and (CPI) Inflation data to be released later in the day […]

In Dehradun, Mortal remains of rifleman Sandeep Singh Rawat arrives at his home town in Pauri Garhwal, Uttarakhand, last tributes being paid. He was martyred in Tangdhar encounter. Last tributes being paid to soldier Rifleman Sandeep Singh Rawat who lost his life while foiling infiltration bid in Kupwara  of J&K. Nation salutes the supreme sacrifice […]

Today morning in Ahmedabad city at around 7:30 am, a lady was injured after being knocked down by BRTS bus near Dharnidhar. Injured lady has been hospitalized. Due to BRTS bus accident daily commuters including office goers, students and other passengers face hardship. People including ladies going to drop their kids to school and other […]