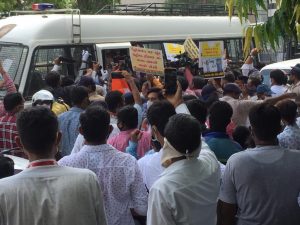 Today in Surat, Patidar leader Hardik Patel was produced before Surat Court on expiry of his judicial custody. Hardik is in Surat jail under sedition charges. In Surat court he kept silence on a question from media on Delhi CM Arvind Kejriwal’s statement in his support. Recently, Kejriwal had commented that Hardik Patel is not […]

Today in Ahmedabad, in Chandlodia area one case of rape by mother’s livein partner on a minor girl has come up. In this connection Sola Police has arrested one person. On investigation police accused was in livein relationship with mother of the victim girl. A complaint against Sunny Shah has been made for multiple times […]