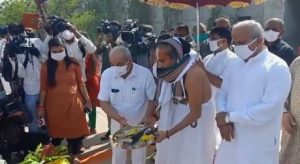 PM Modi and Sharif to meet on sidelines of SCO Summit

Prime Minister Narendra Modi and his Pakistani counterpart Nawaz Sharif will meet on the sidelines of the SCO Summit in Russia on July 10. According to sources, the two leaders, who will be present in Ufa to attend the Shanghai Cooperation Organisation (SCO) Summit, will be meeting on the sidelines of it. However, the details […]

Yesterday on Raksha Bandhan day at 5:pm in the evening, one AMTS bus in an accident killed 2 people on the spot. 4 others were injured. One I-10 car and Activa scooter which was going from HK Colege to VS Hospital side was knocked down by a speeding AMTS bus rushing down from Nehru Bridge. […]

VIDEO OF ANANDIBEN PATEL SERVES TO CHILDREN AT OPENING OF AKSHAY PATRA FACILITY Article by Darshana Jamindar Gujarat Chief Minister Anandiben Patel inaugurates Modern Akhshay Patra Foundation’s 23rd Cooking Facility at Bhadaj near Gandhinagar. This was an attempt by 23rd run by Chimanlal Agrawal family.  This is an effort towards Gujarat’s tradition of feeding hungry […]