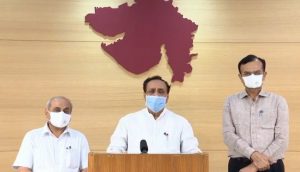 The LD engg college principal was top contender for the post. LD College of Engineering Principal M N Patel has been appointed the vice chancellor of Gujarat University. Patel, who has been appointed for a term of three years, will take charge today.The post was lying vacant since Adesh Pal’s unceremonious exit amid allegations of […]

Today afternoon, in Gondal district police is investigating in killing of Kiran Suresh Makwana, age 15, by his father in Charodi village by cutting his throat in his farm. Accused Makwana also burnt nearby hut, as per source.

In Ahmedabad, case of negligence in VS Hospital (Sheth Shree Vadilal Sarabhai General Hospital) with a small kid has come to light. On 2nd June, one six months old girl was treated in the hospital for Pnuemonia. Due to neglect of Nurse Saroj Patani while removing Intravenous Catheter from hand of small girl cut happened […]