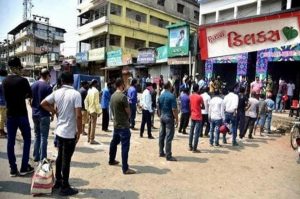 Election Commission is likely to announce the schedule for assembly polls in five states, including West Bengal and Tamil Nadu, today. EC has convened a press conference this afternoon where polls to Assam, West Bengal, Tamil Nadu, Puducherry and Kerala could be announced. As per available indications, the polls would be held in April-May. The […]

By-elections in Gujarat for 4 seats on 21st October

Today Chief Election Commissioner Sunil Arora made in a press conference made an official announcement of state assembly elections in Maharashtra, Haryana,Bihar and Gujarat. EC announced by-elections on 64 seats in different states with an expenditure limit of Rs 28 lakhs on each candidate. EVMs are safe and would be used during state assembly elections. […]

India vs Australia in 3rd ODI at Indore: India on 147/2 Today in 3rd ODI One Day International between India and Australia played at Holkar Stadium in Indore. Australia scored 293/6 in 50 overs. Rohit Sharma was out on score of 71 runs off 62 balls. Sharma was caught by sub (HWR Cartwright) in Coulter-Nile’s […]