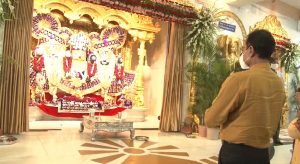 Ahmedabad: young girl commits suicide due to cheating by boyfriend

Today, 19 year old young girl Ishita resident of Chandkehda commited suicide on cheating by her boyfriend. She hanged herself to fan in her house. Actually, her boyfriend Rohan was cheating her, developed physical relation with her, extracting money from her. Also, Rohan had relations with other girls also. Ishita on coming to know about […]

Rajni Patel Gujarat HM at opening of Over Bridge in Mehsana

On Monday, Gujarat Home Minister Rajni Patel at opening of Over Bridge at Khambhel Ambala in Mehsana district.

Ahead of Prime Minister Narendra Modi’s fourth rally in Bhagalpur today, Chief Minister Nitish Kumar asked him not to make new promises to Bihar but “show moral courage” and ensure implementation of all the pledges made till date. “Show moral courage. No new promises please. Outline a credible action plan to deliver on the promises […]