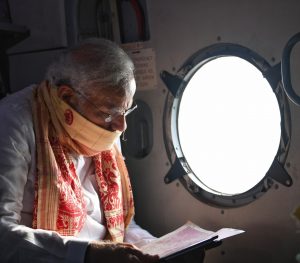 Union Health Minister Mansukh Mandviya has been included in the Cabinet Committee on Political Affairs. The Home, Finance and Defense Ministers are ex-officio members of all committees. Mandaviya replaced Dr Harsh Vardhan. He is among the seven ministers who got elevated to the Union Cabinet of Prime Minister Narendra Modi on July 7, 2021.  The […]

Today, Gujarat farmers of Ahmedabad district were explaining benefits of farm ponds for irrigation and farming constructed by government under Sujalam Sufalam scheme. Farmers explained that Narmada canal’s water helps in irrigation in crops like cotton. We get fodder through out the year and it has increased milk production even.  Gujarat Farmers call finds blessing […]

Surat: in Vareli incident of big fire in Dyeing Mill; flames could be seen from 10 kms

Today in Surat, in Vareli incident of big fire is reported in a Suhag Dyeing Mill. The fire was so massive that flames could be seen from a distance of 10 kms. After 5 hours, fire team was able to bring fire under control. Fire took place due to short circuit in the Mill.