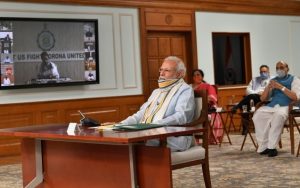 Today, Eight-term member Sumitra Mahajan was  unanimously elected Speaker of the 16th Lok Sabha. Mahajan  become the second woman presiding officer of the Lower House after her predecessor Meira Kumar. Mahanjan was unanimously elected as Speaker of 16th Lok Sabha. Soft spoken, 71-year-old Mahajan, the eldest and senior-most among women Members of Parliament, in the […]

Today, Gujarat Chief Minister Anandiben Patel conducted roadshows in her home town of Patan and Mahesana, in a Patidar dominating area, as part of her election campaign for the ruling BJP for the second phase of the local body polls. In the meeting she claimed that the people of her own community (Patidars) who had […]

Prime Minister, Narendra Modi, said revamping urban governance should be at the core of the vision of the Ministry of Urban Development. He was chairing a high-level meeting on urban development issues. In order to realize this mission, Prime Minister emphasized the need to institutionalize special training programmes for urban administrators to systematically improve the […]