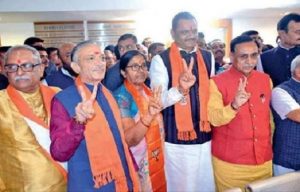 After its Mars mission, India now aims to puts humans into space. The first steps towards flying Indian astronauts into space could be taken in weeks.The Indian astronaut capsule has been unveiled for the very first time. If all goes as per plan in the first experimental flight of India’s latest monster rocket, the Geo-synchronous […]

In a technology innovation effort by IIT Gandhinagar, it will develop new fire fighting technology. New system will have small quantities of condensed aerosol products to combat with big and massive fires.

Aamir Khan has begun shooting for his much awaited movie Laal Singh Chaddha in Chandigarh recently. Aamir was spotted in the character’s look as he sported a thick beard and turban. Bollywood actor Aamir Khan’s first look from his next film is revealed.Kick off party for Laal Singh Chaddha with Aamir Khan, Kareena Kapoor Khan […]