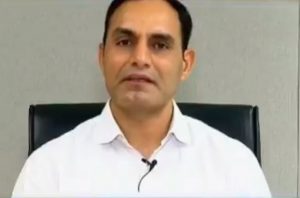 Today in Ahmedabad, on  girl from Satellite area exploited in the name of work at Anil Kapoor Film Production. Girl had given photo to the Blackmailer guy in Mumbai during auditions. ‘Meri Ek Galti Maaf ‘movie in which role of a Political Journalist, also will be acting in the film as per Blackemailer  Anupam Kher. […]

Swaraj polls in Gujarat are over and both the parties have different impact of Patidar agitation in Gujarat. Post elections, Patidaar Anamat Anandolan Samiti (PAAS)  Gujarat conveners will meet on December 10 in Ahmedabad to boost Patidar agitation. They  will work out onto which direction to their agitation be given further and will device a […]

Today in Delhi, United States President Barack Obama arrived in India for a three-day landmark trip during which the two countries will strive to make progress on climate change, defence and economic cooperation. Prime Minister Narendra Modi was at the Palam Air Force Station to receive the US president and his wife Michelle.It is a […]