Today in Ahmedabad, Nalin Kotadiya BJP MLA from Dhari constituency in Amreli,  has been booked for allegedly demanding Rs. 2 crores from a builder. As per the builder, Kotadiya allegedly demanded for Rs.2 crores over land issue. Extortion case has been filed against MLA and 2 others in Vastrapur police station based on a complaint by the builder Madhubhai Vasani. Police has started investigation in the matter. Kotadiya was caught on camera attacking the builder in office.

Video of Kotadiya has gone viral. 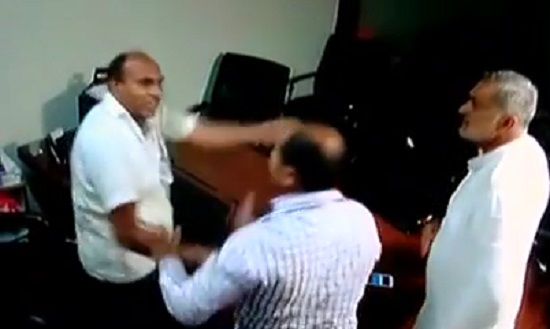 However, Kotadiya has turned down the charges against him. he said that actullay some big shots are involved in land deal worth crores so they are trying to put bogus charges on me.

November 8 a sad day for India; Rahul hits out at PM Modi

Ayushmann Khurrana’s next film ‘Hawaaizada’, which has been directed by Vibhu Puri, is set to hit theatres on January 30, 2015. ‘Hawaizaada’ also star Pallavi Sharda and Mithun Chakraborty in lead roles. The film is based on the life of scientist Shivkar Bapuji Talpade, who is credited to have constructed India’s first unmanned plane. The […]

Today in Ahmedabad, Gujarat High Court directed state governmentto permit police constables to appear in promotional exam for PSI Police Sub Inspector. Due to massive earthquake in Gujarat during December 2000 and January 2001 wherein 78 constables could not get their appointment letters on time due to chaotic situation in the state. Government has refrained […]