Here is the First look of Actor R Madhavan from his upcoming film “Saala Khadoos”. He will be seen as a retired boxer-turned-coach in the Tamil-Hindi bilingual, which is being directed by Sudha Kongara, former associate of filmmaker Mani Ratnam.

The film is titled ‘Irrudhi Suttru’ in Tamil and ‘Saala Khadoos’ in Hindi. The 44-year-old is known for his roles in films such as “Rang De Basanti” and “Tanu Weds Manu”.

Here is the another poster of ‘Irrudhi Suttru’ in Tamil:- 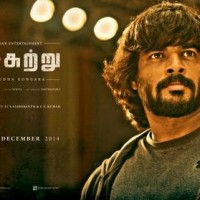 NSUI workers made demonstration blaming commercialisation of education in Gujarat

Today in Ahmedabad, SSC students finds Maths paper difficult with out of syllabus questions covering 15-20 marks. Currently, Gujarat Board’s SSC and HSC exams are going on in the state.