The new BJP government in Gujarat, led by Vijay Rupani and his deputy Nitin Patel, will be sworn-in at a grand function in Gandhinagar tomorrow. Prime Minister Narendra Modi, BJP national president Amit Shah, chief ministers of all BJP-ruled states and those governed by NDA allies are expected at the ceremony, to be held at an open ground near the state secretariat, Gujarat BJP president Jitu Vaghani said. 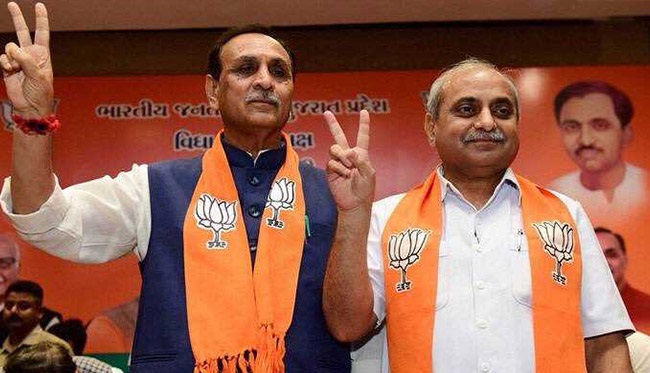 Several Union ministers and other senior leaders of the party have also been invited for the swearing-in ceremony. “We have also invited saints and religious leaders of various faiths to give us their blessings,” Vaghani said. On December 23, the state BJP leaders met Governor O P Kohli and staked claim to form the government. The governor accepted the BJP’s claim and asked the party to form the next government. Rupani and Patel were elected respectively as the leader and the deputy leader of the BJP legislature party on December 22, in presence of central observers – Finance Minister Arun Jaitley and the party’s general secretary Saroj Pandey.

The BJP secured a simple majority by winning 99 seats in the 182-member Assembly in the recently-held elections. The party’s tally this time came down by 16 seats. It had secured 115 seats in 2012. This is the sixth consecutive time that the BJP has won the elections in Gujarat. The opposition Congress, which won 61 seats in 2012, managed to increase its tally to 77 this time. With its allies, the Congress’ strength in the Assembly is up at 80 seats.

Gujarat govt’s tax increase on fuel; increase of Rs 1.90 in petrol, Rs 1.82 in diesel per liter

Union Home Minister Amit Shah to visit Ahmedabad tomorrow on 21st June. His detailed program of launching various events like visit to vaccination centre, launching of flyovers, visit to APMC Kalol, visit to school and PHC in Gandhinagar is as follows :

VIDEO OF CM ANANDIBEN INAUGURATING PROGRAM UNDER THRIVING CITIES OF GUJARAT PHILOSOPHY Today, Gujarat Chief Minister Anandiben Patel inaugurated a program under “Thriving Cities of Gujarat a Pride” philosophy for overall development of Gujarat and its cities. Towards this, funds in the forms of cheques were given to Surat Mahanagar Palika and Bhavnagar Palika. Ministers […]